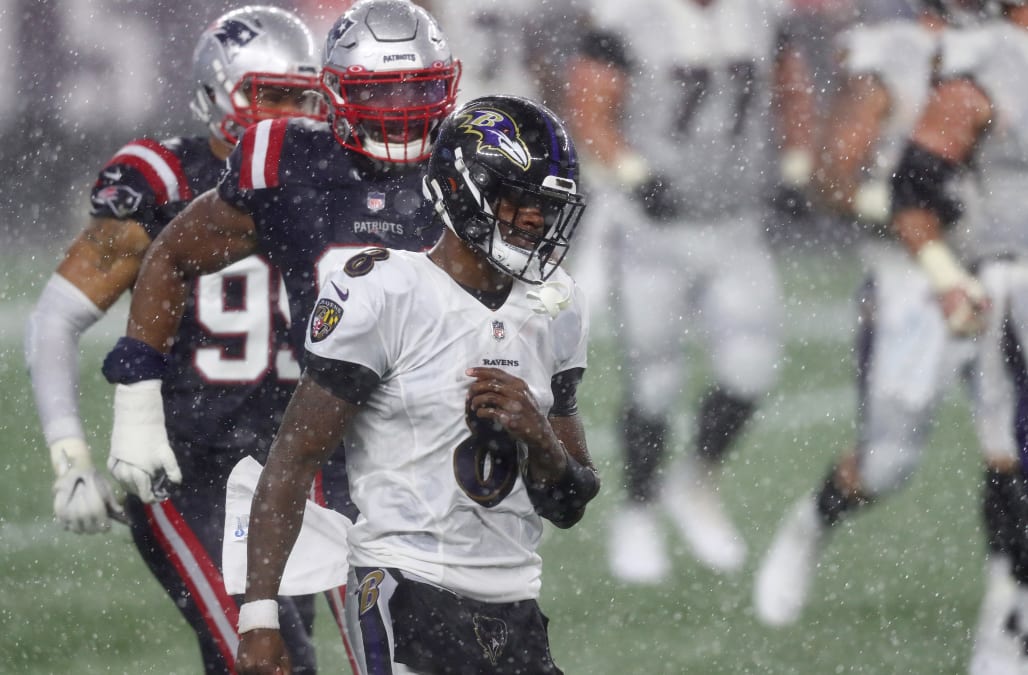 The sports fairy tale, made popular by Michael Jordan’s Chicago Bulls, is that a team takes its lumps in the playoffs and then fights its way over the hill and to a championship.

That’s nice in theory, but it doesn’t always happen. Especially in the NFL.

Two seasons ago, the Baltimore Ravens got to the playoffs with then-rookie Lamar Jackson and lost in the wild-card round. Last season, they went 14-2 and were stunned by the Tennessee Titans in the divisional round.

The Ravens had a lot coming back, added a few more key pieces, and it looked like this could be their year. Instead, they’ve already exceeded last season’s loss total. If there’s a hard-earned championship coming, the Ravens are going to have to get a lot better before January.

Baltimore looked bad on Sunday night against a New England Patriots team that is having its worst season since 2000. Jackson, the MVP last season, is nowhere near that award this season. The Ravens hung around because the Patriots aren’t equipped to blow a good team out, but they still lost 23-17.

The Ravens aren’t bad, but they’ve taken a step back. And offensive coordinator Greg Roman might start to feel heat for it.

There have been gripes about the offense in public ways. Marquise Brown tweeted his displeasure at his role, though he predictably deleted that. Jackson made a startling comment that defenses were calling out what the Ravens were going to run.

“They know what we’re doing,” Jackson said on “The Rich Eisen Show.” “Sometimes stuff won’t go our way if they’re beating us to the punch.”

If there’s a coach who can take advantage of a predictable offense, even with a defense that’s undermanned, it’s Bill Belichick. Brown was absent from the offense again. Jackson ran more than he has in some games this season, but didn’t get any big plays with his feet.

When the Ravens tried to get tricky, it didn’t make any sense. The Ravens have the quarterback who holds the single-season rushing record at his position, and on fourth-and-1 in the third quarter, they ran a wildcat formation. Running back Mark Ingram couldn’t grab the snap, he had to fall on it and the Patriots took over. Later in the third quarter, when the Ravens hit a long pass to Mark Andrews, it came back because of illegal formation penalty for not having enough players on the line of scrimmage. It was a sloppy game for the Ravens, and not entirely because of the rain.

Roman had a great 2019. The Ravens ranked first in points, second in yards and set an NFL single-season record for rushing yards by a team. He has done great work through his career, especially with mobile quarterbacks. However, even with most of the key pieces back aside from retired guard Marshal Yanda, the Ravens’ offense looks nowhere near what it was a year ago. It’s stale, and a lack of execution by Jackson and everyone else hasn’t helped. We’ll see if more fingers start being pointed, and if Roman gets the brunt of it.

Patriots do enough on offense to win

The Patriots’ offense isn’t exactly unpredictable anymore. They have very little in the passing game. New England needs to run on most of its plays to have any hope for success. And the Ravens still couldn’t stop it.

Baltimore gave up yards in chunks to Damien Harris, New England’s latest back off their assembly line. The Patriots hit the one key pass they needed, a trick throw from receiver Jakobi Meyers to running back Rex Burkhead for a 24-yard touchdown right before halftime.

The Ravens had chances to win it in the fourth quarter but couldn’t put a drive together. One crucial drive stalled after another bad shotgun snap flew past Jackson and he had to fall on it for a huge loss.

The Ravens are 6-3 but haven’t been efficient in any way, at least compared to last season. The Pittsburgh Steelers are 9-0 with a win over the Ravens, and that seems like an almost insurmountable lead in the AFC North.

The Patriots probably aren’t going anywhere in a tough AFC. They’re 4-5 after Sunday’s win, at least alive after a couple wins in a row. It seems like the Ravens might not be going very far either. The Ravens blew a great chance last season. Despite the popular myth, it’s not a given that the next step for a team after playoff failure will be forward.

Bill Belichick through his career

CIRCA 1995: Defensive Coordinator Bill Belichick of the New York Giants in this portrait circa 1985. Belichick was an assistant coach for the Giants from 1979-85. (Photo by Focus on Sport/Getty Images)

PITTSBURGH, PA – DECEMBER 18: Head coach Bill Belichick of the Cleveland Browns looks on from the sideline during a game against the Pittsburgh Steelers at Three Rivers Stadium on December 18, 1994 in Pittsburgh, Pennsylvania. The Steelers defeated the Browns 17-7. (Photo by George Gojkovich/Getty Images)

27 Jan 1997: Defensive coordinator Bill Belichick of the New England Patriots prior to the Pats’ 35-21 loss to the Green Bay Packers in Super Bowl XXXI at the Superdome in New Orleans, LA. (Photo by Sporting News/Sporting News via Getty Images)

HEMPSTEAD, NY – FEBRUARY 4: Bill Belichick, former assistant coach of the New England Patriots, appears at a press conference at the New York Jets training facility 04 February after being named the new head coach of the team. It was also announced that former Patriots head coach Bill Parcells has been hired as a consultant to the Jets . AFP PHOTO/Malcolm CLARKE (Photo credit should read MALCOLM CLARKE/AFP/Getty Images)

HEMPSTEAD, NY – JANUARY 4: Head coach Bill Belichick of the New York Jets resigns from the job at a press conference just one day after accepting the position at Hempstead, New York on January 4, 2000. (Photo by Al Pereira/Getty Images)

New England quarterback Tom Brady walks off the field past coach Bill Belichick in the third quarter against the Pittsburgh Steelers in Pittsburgh on October 31, 2004. REUTERS/Pam Panchak JC/JDP

New England coach Bill Belichick watches from the sidelines during the first quarter against the Pittsburgh Steelers in Pittsburgh, Pennsylvania September 25, 2005. The Patriots beat the Steelers 23-20. REUTERS/Pam Panchak

NFL coach Bill Belichick arrives with Linda Holliday at the Time 100 Gala in New York, April 24, 2012. The Time 100 is an annual list of the 100 most influential people in the last year complied by Time Magazine. REUTERS/Lucas Jackson (UNITED STATES – Tags: ENTERTAINMENT SPORT FOOTBALL)

FOXBORO, MA – JANUARY 22: Head coach Bill Belichick of the New England Patriots is interviewed by Jim Nantz after his team victory over the Pittsburgh Steelers in the AFC Championship Game at Gillette Stadium on January 22, 2017 in Foxboro, Massachusetts. The New England Patriots defeated the Pittsburgh Steelers 36-17. (Photo by Maddie Meyer/Getty Images)